It's time to pick another random book to review, but before we do that I have to relate an experience that I had at the recent Motor City Comic-Con that makes being a comics fan a lot of fun.

I'm not sure how many of you are familiar with Detroit's twice-yearly comic book convention, but it's the area's largest show. It's not Chicago or New York level big, and it's a far cry from 15 years ago when I was waiting in line to get Neil Gaiman's signature on my Season of Mists leatherbound hardback, or having to walk single file through the aisles trying to avoid to the snaking lines to get Todd McFarlane or Rob Leifeld's autograph (or was that line for the Spawn-mobile...I'm not sure).

Anyway, this con has long since seen it's glory days, but they still manage to pull in a respectable list of attendees and events. At the very least, it's an opportunity for my son to get his picture taken with whatever assorted Star Wars characters happen to walk by.

One of the creators who usually shows up is Art Baltazar of Tiny Titans. My four year old son is a fan, and can name all of the characters, so we always stop by to pick up a few books and let Art now how much he enjoys the book. This year, Art Baltazar went above and beyond and worked up a sketch in marker and crayon of my son dressed as Superman! 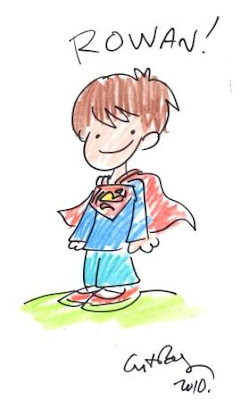 Aw Yeah, Art Baltazar! You're the best, and you really made my son's day, not to mention making this a con to remember.

So that's one of the things that make being a comic book fan so much fun, but how about another thing? Gee, I don't know, something like picking another completely random book to review. Take it away Randomizer... 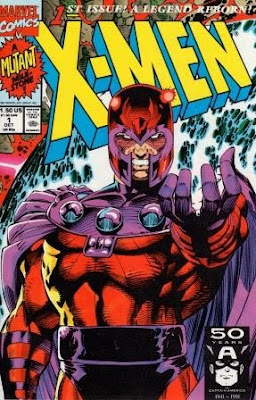 Well it had to happen sooner or later, as the odds were in this issues favor. I was a bit of a naive comic book collector in the early 90's, so when the speculator boom was in full steam barreling down the tracks, I was was right there pulling the steam whistle. I believe this title holds the record as the most copies of a single book that I own.

It came with five different covers and I bought two of each one. So yeah, that's ten issues of a book that I only ever read once. Now, however, I get to double the enjoyment from my initial investment as the randomizer has picked this book for me to read and review next.

Besides, when my son gets ready for college these ten issues are going to pay his way into a master's degree, right? Hello? Anyone?

Well, at the very least he'll have this blog post to read while he's standing in the financial aid lines at the administration office. See you in a day or two for the review.
Posted by TomO. at 7:52 AM