I remember being so excited for this title when it was solicited. Ultimate Spider-Man was one of the best books on the stand, and I had high hopes for this title carrying the imprint forward. The fact that it featured two creators who blew things up really good over on The Authority didn't hurt either.

And when the issue came out, it sure as hell delivered. If only they could have kept the production on this series on pace...but that's a blog post for another day.

I haven't read this book since it was out originally, so I'm curious to see how it holds up compared to all of the work that Mark Millar and Bryan Hitch have done in the interim. Let's find out...

The Ultimates Wow, Bill Jemas credited with "inspiration"...Marvel really was a different company back then.

Back to the actual book, and it's time to break the fourth wall a little bit. Usually when I do these reviews, I'll hold off reading the book until I sit down to review it and I write it as I read the book cold. This time was different. I was hooked from the first panel and didn't put the issue down until I had read it all the way through, leaving the keyboard untouched.

I honestly didn't remember that this issue was this good. Mark Millar wrote a story that was perfectly paced, action packed, heartfelt, and reverential to what has come before (both in respect to WWII and The Avengers). I know, I know...this is Mark "Kick-Ass" Millar we're talking about, but this is about as perfect a first issue that you could ask for with which to retell the Avengers story. 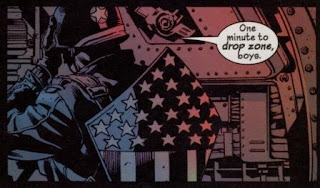 This issue is almost exclusively told in a World War II flashback, where Captain America is leading a crew of soldiers on a nighttime raid into Iceland. It's there that the Nazi's have succeeded in building a hydrogen bomb, currently aimed at Washington D.C.

Millar would later go on to expand the character of Captain America as some right-wing wet dream, although this was the pre-"tea bag" right-wing that was still somewhat sane. As the issue starts, however, Cap is mostly seen only in the background, leaving his fellow soldier and partner, Bucky, to bring us up to speed as he talks with the other soldiers. Bucky seems to revel in the fact that he's partnered with a living legend, ribbing and teasing his fellow soldiers, while building up the mystique of Captain America.

The good thing for Bucky, however, is that you can actually count on Captain America to not only live up to his reputation, but to exceed it as well. While the grunts are caught in a massive gun battle after parachuting onto the armored launch pad, Cap eschews a parachute in favor of driving the bomber plane right through the front door. 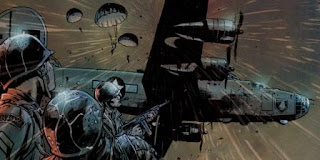 This brings me to one of my favorite Captain America images of all time. 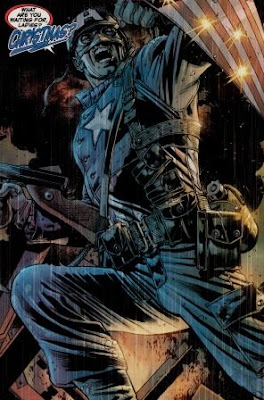 Its halfway through the issue, and its the first time we see Captain America out of the background. It's a beautiful image, and Bryan Hitch has managed to re-design Cap's costume as some sort of fatigues fueled, spandex bastard child. It's so beautiful in it's simplicity, that I'm surprised no one had ever thought of it before. In all the annals of costume redesigns, this gets the gold medal from me.

While we're on the subject of Bryan Hitch, I have to say that this issue completely wowed me. I remember really liking his stuff in the past, but after his run on Fantastic Four and Captain America: Reborn, I was honestly asking myself what the big deal about Hitch was. The work that he's produced over the last couple of years is such a pale comparison of what we see here, that it's almost depressing. This is the man who helped launch "wide-screen" comics, and here he is at the top of his game.

So anyone familiar with the legend of Captain America probably knows where this issue is headed. The soldiers breach the launch pad, but it's too late as the ignition sequence has begun and the prototype hydrogen bomb begins it's journey to D.C. Now this is Captain America that we're dealing with, and he's not about to let that happen so he jumps through the exhaust plume and grabs a hold of the rocket as it takes to the sky.

Knowing he's on a one way ride, his only choice is to blow up the guidance system with a grenade, which takes care of the rocket, but unfortunately blasts Cap into the frigid seas below to be frozen alive for his eventual rendezvous in the current day. As he sinks into the ever darkening depths, Millar pulls out the "If you're reading this that means I'm dead" letter, written to Cap's fiance. It runs the danger of coming off as a hackneyed trope, but it works here as Millar keeps it short and sweet, and it's the perfect balance to the machine of a soldier we bore witness to in the previous pages. 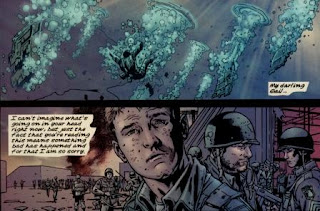 With a hint of what's to come , the issues wraps up back in the present day with the briefest of looks at Ultimate Tony Stark, as he begins his role in the birth of the Ultimates.

It should be obvious at this point in the review as to what we've learned. Mainly that Millar and Hitch were, at one time, deserving of all the hype and hyperbole thrown their way. All right, that maybe a little harsh, but I personally have not really enjoyed much by these two creators post-Ultimates.

I'd like to think the remaining twenty-five issues are waiting to be rediscovered as masterpieces of their genre as well, but I think I'm going to hold off finding out and just savor this moment for a while. After all, it's not often these days that I can get jazzed about the Avengers, and I don't need any more doses of cruel reality harshing my buzz.

All characters and artwork reproduced are (c) Marvel Comics
...and of course, inspired by Bill Jemas!
Posted by TomO. at 9:46 PM