Lines in the sand don't come cheap...and The Ultimates!

At the risk of sounding too melodramatic, today's kind of a bittersweet day. I've been waiting for what seems like forever to be able to enjoy a current Avengers book. No offense to the people who enjoy the Sentry and Wolverine rubbing elbows with, well...a bunch of other people who I couldn't really care less for.

I'm not saying Bendis' New Avengers was bad, it's just not for me. It's similar to other people enjoying Booster Gold taping KICK ME sings on Batman's cape. I wouldn't begrudge anyone else their Bwa-ha-ha League, but it's not for me.

Today was supposed to be a joyous day with the good, old-fashioned Avengers coming back into the fold. Even with my reservations about the creative team, I was looking forward to jumping back into the Avengers in a big way. I was even willing to look past my dislike of paying 4 bucks for a standard sized comic nook. After all, it was just for the first issue, right?

Wrong. I was looking at the solicits for August yesterday and noticed that both of the Avengers books that I was going to pick up are still priced at four dollars well after the first issue. I'm sorry, but that's just too much to spend month-in and month-out.

So yeah, as eager as I am to follow Cap and the boys again, I just can't do it. I'm voting with my wallet on this issue, and unfortunately the Avengers are the innocent bystanders.

I'm sure it'll be depressing leaving the issues on the racks for the first couple of months, but you know what? I dropped all the Ultimate titles when they bumped up to four bucks after Ultimatum, and I find that I really don't miss them.

Lucky for me, I still have an in with one of my favorite characters, so I'll be more than happy to put my funds towards a $2.99 book like Hawkeye and Mockingbird to get my Avengers fix until Joey Q's experiment fails or ebay lets me pick up the run at a more reasonable price.

With the soapbox back in the closet, let's get to the business at hand, which is picking a new random book for me to review. Take it away Randomizer... 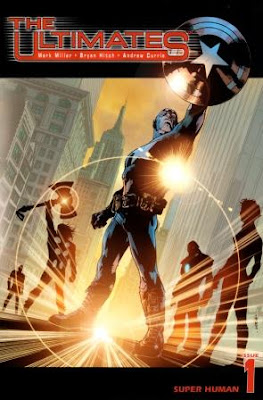 ...and that book is The Ultimates #1 from March 2002, published by Marvel Comics!

So I don't know what exactly I did to piss of the Randomizer, but I just get done baring my heart about the pain of having to leave some of my favorite titles on the racks and it goes and picks both an Ultimate and an Avengers title for me to read.

Actually, though, I'm looking forward to this one. It's been long enough now that the bitter taste of having to wait eight months for an issue of The Ultimates is long gone. I remember liking this issue originally, but the process of the books creation led me to become burned out on this title long before Mark Millar passed the baton to Jeph Loeb.

I haven't re-read this since it's original release, so I can't wait to see if it still holds up. See you in a day or two for the review.
Posted by TomO. at 4:02 PM