He's never really been one of my favorite X-Villains. In fact, I can honestly say that I could live a happy life and never read another book he's in. To me, there's nothing too terribly interesting about an antagonist who has the same power set as our hero, just more so and meaner to boot.

I'm actually somewhat surprised that I still have this mini-series in my collection. A couple of years ago I purged a bunch of miscellaneous X-related books from the 90's on ebay. I figured this would've been one of the first to go, but I guess since it didn't start with an "X", it escaped the initial offerings. Unfortunately for it however, I'm about to start wave two of the ebay purge, and now that I know it exists, it's days are numbered.

Unless of course, this re-read totally blows me away. I can't say that I'm holding my breath on that score, but we'll see.

Sins of the Fathers! The issue opens up with Sabretooth and Birdy, his female traveling companion with a rather garish taste in firearms, on a life-or-death mission. In a prescient move, they commandeer a bus a good six months before Keanu Reeves did it on the big screen. It would appear that Sabretooth has some sort of bomb implanted in his chest and he has a grand total of fifteen minutes to get it deactivated before it goes off.

We're only one page in so far, so there's still plenty of time to throw in more summer action movie tropes. Although if Sabretooth says "I'm getting too old for this shit", I'm outta here.

The key to getting the bomb deactivated lies in the high rise building of the Mammon Fiduciary Trust Tower, which just so happens to have a conclave of ninja waiting in the lobby for them. And what better way to take on a horde of ninja than by driving a bus right through them.

Needless to say, all of the commotion in the lobby alerts the bankers and executives upstairs that Sabretooth has arrived. 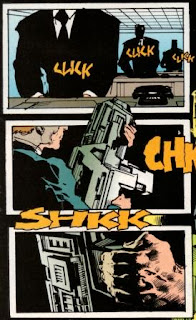 Fortunately for the shareholders of Mammon Fiduciary Trust, these are not your ordinary bank employees.

After barricading the doors and stairwells, they wait for Sabretooth to make his way to the upper floors. There, the leader of this operation, who calls himself Tribune, has donned an armored battle suit with which he plans to use to kill Sabretooth himself.

Sabretooth takes a shortcut up the side of the building, bypassing all of the overly armed bankers waiting for him, and takes the fight directly to Tribune. 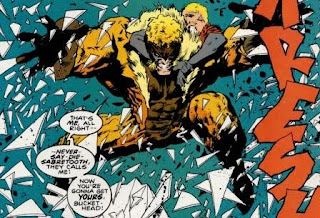 It turns out that he was the one who had hired Sabretooth to kill Mystique earlier in the series. Sabretooth ended up letting her walk, and now the other part of Tribune's plan is about to come unraveled as Sabretooth has just survived a point blank shot to the chest from his massively oversized 90's gun.

Seconds later, it's Tribune who's on the verge of death as Sabretooth hoists him up and throws him out the window to his apparent death. 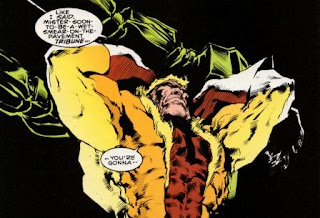 With that taken care of, Sabretooth only has minutes left before the bomb in his chest goes off. Luckily for him, the surgeon who implanted the bomb in the first place was with the Tribune when Sabretooth found him. He pulls him out from under the table he was cowering under and forces him to operate, using Sabretooth's own claws as scalpels. The make-shift operation is a success, and in a scene that would make Rambo proud, he sews himself up with some safety pins.

Now try not to be too surprised, but while the rather primative surgery was going on, Tribune was climbing his way back up the side of the building, having escaped death after being tossed from the skyscraper. He reaches the top floor to see Sabretooth with his back to him. Without hesitation, he empties the clip from his gun. Unfortunately for him, Sabretooth knew he was there and swings the doctor around to use as a human shield to take the brunt of the attack.

With Tribune defeated once again, Sabretooth demands answers as to why he went through such trouble to have Mystique and himself killed. Tribune refuses to answer, but lucky for Sabretooth, his female companion just so happens to be a telepath. 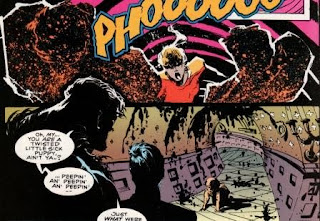 One mental whammy later, and Sabretooth is wandering around the inside of Tribune's head. What he finds there is unexpected to say the least, as it turns out that Tribune's mother is Mystique and his father is none other than Sabretooth himself!

I'm sure you can imagine that the unconditional love between a father and son kicks in right about now, and Sabretooth and Tribune tearfully bond over all of the years that they missed being together.

Or, and this is the more likely scenario, Tribune reaches out and stabs Birdy to death as Sabretooth is threatening to kill him. So why did Tribune kill Birdy instead of trying to get Sabretooth?

It turns out that Birdy was using her mental powers to curtail the bad memories and urges of Sabretooth to make him more docile. Now that she's gone, Tribune has condemned Sabretooth to a more feral existence.

Sensing that maybe his boy has his sense of sadistic ruthlessness after all, he lets him live. As he turns his back on him once again, he warns his son that he better watch it, for he's going to be keeping an eye on him. 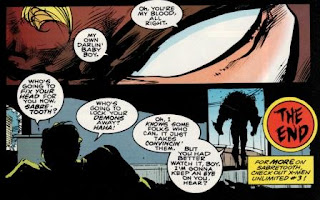 We'll start with the positive first.

I have to admit, that by the end of the 90's I was pretty much done with Mark Texeira's style. I was a big fan when he was on Ghost Rider and Wolverine, but as my interest in those titles started to drift, so did my enjoyment of Texeira's work...or so I thought.

It turns out that absence truly does make the heart grow fonder, as I really enjoyed the artwork on this issue. I instantly remembered the style that is so singularly recognizable as Texeira's, but there was also more to it than I initially remembered. Where it was big and exaggerated, it was also highly detailed and perfectly paced. I'd forgotten just what a good storyteller he is.

So I enjoyed looking at this book quite a bit, I just wish I cared more for the character, for at the end of the issue there was really nothing there for me to attach any interest to.

We find out that he had a kid with Mystique (she sure got around, and had a lot of babies too) and his son is psycho and now he's more psycho than he has been in a while and it's all just rather psycho and all just rather too much. I didn't find that I cared for any of these characters, so the struggle and drama just fell a little flat. Larry Hama ended up stringing together an action thriller that hit all of the right necessities, I just couldn't bother myself to generate enough interest in the Sabretooth family tree to enjoy it all.

Ah well, they can't all be winners.

Related links for your surfing pleasure...
Posted by TomO. at 10:27 PM