Hawkman is one of those characters that I had no real affinity for until Geoff Johns got his hands on him, along with the likes of Green Lantern, Flash, and the JSA. During my formative comic book years, I just remember Hawkman being somewhat of a rebooted mess, so I never did seek out any books of his own.

It also didn't help that I didn't really buy into his hook...alien police officer who uses bird wings and big weapons and who gains the power of flight from the Nth metal belt that he wears. It seems that if your belt is giving you your power of flight, then the wings would just get in the way. And how do you control the wings? Does the metal do that as well?

It all just seemed a little goofy, with too many questions, and in all honesty I just didn't have the gumption to invest the time to figure it out. But that's what I love about Geoff Johns. He takes the goofy and runs with it, playing it dead serious all the way, and it somehow works. In the intervening years, I've come to enjoy this character quite a bit, although the wings not giving you your power of flight still kinda bugs me...baby steps...baby steps...

But that's a topic for another day, for today we're here to talk about Hawkman #10. It's post-Crisis, and I literally have no idea which version of Hawkman we're going to get. I suppose there's only one way to find out.

All Wars Must End! The story opens up with Hawkman assessing the recent chain of events, kicking himself for letting Deron Ved escape. Who's Deron Ved? As near as I can tell, he's a would be world conqueror commanding a Thanagarian invasion fleet poised just outside of Earth's atmosphere. Not one to navel-gaze too much, Hawkman continues to club his way through the Thanagarians, looking for Ved. 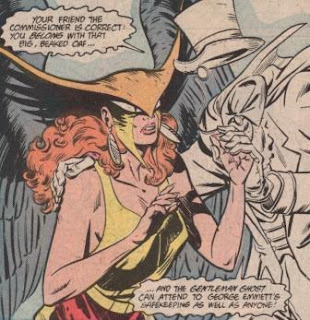 Hawkwoman, meanwhile, has problems of her own while trying to protect the police commissioner of Midway City. With the help of the Gentlemen Ghost she gets him to safety, which allows her the chance to catch up back up with Hawkman.

Following the trail of unconscious Thanagarians, she finds him in Deron Ved's abandoned flagship where he has overheard Ved giving the command for the next phase of the invasion...an all-out thermonuclear attack! Realizing that they may be somewhat outclassed, they rig Ved's spaceship to emit a frequency that only one particular person will be able to hear, in the hope's of calling him here.

In the meantime, they still need to find Ved. Using the Absorbacon, a machine with mind tracking capabilities, they are able to see through other's eyes and soon pick up the trail of Deron Ved. Hawkman rushes out to catch him, while Hawkwoman continues to use the Absorbacon to help guide him. 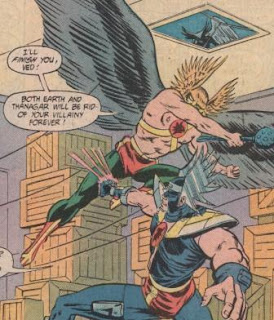 It doesn't take long before Hawkman and Ved are engaged in a rousing bit of fisticuffs. During the tussle, we get a bit of the history between the two men and their time on Thanagar together.

Deron Ved was the instructor at the police academy when Katar Hol was looking to prove himself as a young wingman. There's always been a bit of an antagonistic relationship between the two, fueled by the fact that they have been the only two to ever have been awarded the honor wings. 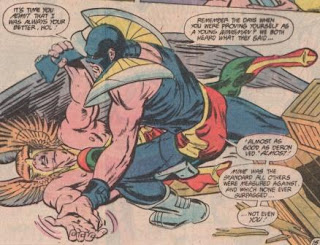 While it's only hinted at here, Ved seems to have had a falling out with the Thanagarian Police Force. Now leading an invasion force, he will prove the true mettle of what it means to be Thangarian while besting the traitor, Katar Hol, in the process.

Breaking free, Ved manages to grab a police officer to use as a hostage. Now on the defensive, Katar and Shayera are forced to take off their wings to save the life of the hostage. Donning Hawkman's tufts and feathers, Ved leaves the Hawks defenseless so that he can continue his invasion plans.

Luckily for the Earth, however, Hawkman had previously booby trapped his wings and now uses a gyroscopic remote control to sabotage the wings that Ved wears. Damaged as they may be, he still manages to make his way to his command ship. Before he can make it onboard, Hawkman and Hawkwoman arrive in their borrowed police car to stop him once and for all.

With no weapons to bring him down, they're forced to improvise. Now I'm not sure how effective this would actually be, but it sure is inspired. 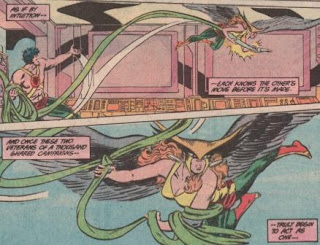 But hey, this is comic books, and the rubber fire hose proves to be too much for Deron Ved to deal with. Defeated and brought low, Hawkman reclaims his mask and wings.

Now, all they need to do is deal with disarming that pesky invasion force waiting somewhere in Earth orbit. They won't, however, have to do that alone. 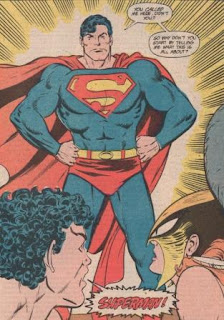 What are you looking so surprised about Hawks? It's not like you didn't send a distress signal for Superman just 15 pages ago.
SO, WHAT DID WE LEARN...

This was a bit of a light read, to tell you the truth.

I guess this is a later addition to the character of Hawkman, but I prefer my winged warriors a bit more gruff, hairy, and aggressive. Someone who's going to use his over-sized mace first and ask questions later. This issue was kinda like watching The Soprano's episodes rerun on A&E. Even the fight scenes seemed sanitized. I mean, seriously...they stopped the mastermind of a would-be alien invasion by tying him up with a rubber hose?!

Dan Mishkin does a serviceable job with the story, but he was handed the unenviable task of finishing up the story that the previous writer had been building up for some time, working with a plot from the editor. And he didn't really get a chance to properly end the story, as John Byrne gets to do that over in Action Comics. Mishkin definitely gets an "A" for effort, but in the larger scheme of things this issue was a little weak.

Steve Howell does an admirable job with the art for the most part, but if I didn't know any better I'd swear there were two different inkers on this issue. There were pages that were dark, detailed, and full of shadows. Likewise, there were also pages that looked thin, weak, and stiff. Not as many, mind you, but still enough to be noticed.

On a positive note, the action heads from this issue over to Action Comics #588, which was at the beginning of John Byrne's relaunch of the Superman franchise. It's the Hawks and Superman fighting Thanagarians in space, and it's a bit more of a complete package than this issue seemed to be. So if you have a hankering to read a Hawkman/Superman team-up, I'd skip right to that one.

All characters and artwork reproduced are (c) DC Comics
Posted by TomO. at 8:35 AM