Superman: The Man of Steel #96

TITLE: Superman: The Man of Steel #96

Sometimes it really sucks being a Superman fan. When you look back on definitive runs through the ages, there hasn't been that many. There have been creators that have left their mark, that's for sure. But when you look at the total time that the character has been published and how many different titles he's had, I'd just expect a little bit more.

One of my personal favorite eras, and definitely one of the high points in the post-death of Superman time, was the Jeph Loeb and Joe Kelly era. They had some great storylines such as Our Worlds At War, Emperor Joker, Return to Krypton, President Lex, Ending Battle and Y2K. They also reintroduced some classic characters like Krypto and Bizarro #1.

All in all, it was an action packed five years plus worth of stories. Loeb and Kelly get most of the credit, as they were the driving forces behind the two major titles Superman and Action Comics. One of the unsung heroes of that era, however was Mark Schultz and Doug Mahnke's run on Superman: The Man of Steel.

Their run had a serious sci-fi bent to it, and focused more on the fantastic, science-based aspect of Superman's life. It's filled with beasts, robots, and mad scientists of all stripes, and there's no one better to draw them than Doug Mahnke. His style is bold, expressive, and larger than life without turning into a caricature of itself. He's a great storyteller, who's got a real clear sense of pacing and plot. It's no wonder that he ended up as one of the key talents in the Green Lantern universe these days, as that book is tailor-made to his strengths.

As good as he is now, he was just as good then. Let's sit back, read a good comic, and enjoy the show...

Home It's an average day for Clark Kent, as he goes about his average domestic duties before returning home after work. 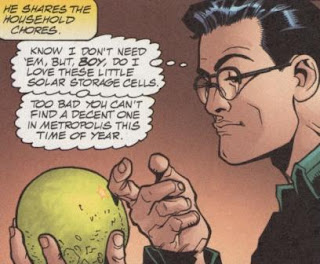 It's encouraging to know that even Superman, with all of the powers at his disposal, can't pick out a perfect cantaloupe either
It's only after he gets to his home, that we realize how decidedly non-average Clark Kent truly is. 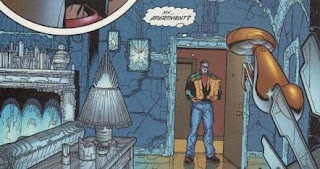 I love that the lamp has the same headress as Byrne's Lara-El
So if this is a decidedly non-average turn of events for Clark Kent, Superman's day actually started out quite normal by his standards...punching out gigantic robots!

This is the issue that brings John Henry Irons back into the fold of the Superman titles on a regular basis as an inventor and weapons engineer for the S.C.U., and later for himself with Ironworks. The robots were his creation, and Superman was helping him test the operation limits of their effectiveness in fighting superpowered beings. 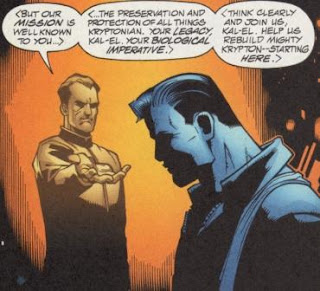 Back to the present, and we catch up with Clark in his Kryptonized apartment. The image of the ancient Kryptonian scientist Kem-L appears before him, and it doesn't take Clark long to figure out that all of this is the Eradicator's doing. The Eradicator program is getting all Darth Vader on Clark, demanding that he join them as they rebuild the world in the image of Krypton.

We all know how this is going down, as Superman may be Kryptonian by birth but Earth is his home now and he's having no part in the subjugation of it's people.

Since the Eradicator is all about the preservation of Kryptonian technology, it chooses the ancient warrior art of Torquasm-Vo to settle their differences. I mentioned earlier how there were so many great ideas born from this era of Superman titles...this one? Eh, not so much. 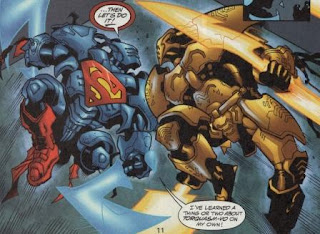 So while Superman fights that particular battle, the Justice League is busy fighting another battle on his behalf. A picture had surfaced of Superman wearing a wedding ring, so the JLA holds a press conference where they all show off gold bands and declare that they are all married...to the Justice League! It's a little cheesy, but it's fun comic book dramatics. 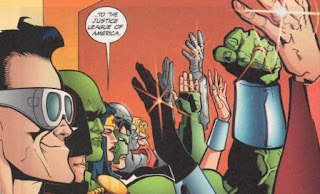 Hey, look kids! It's the first appearance of the JLA here at the Random Longbox, and it only took 54 reviews! 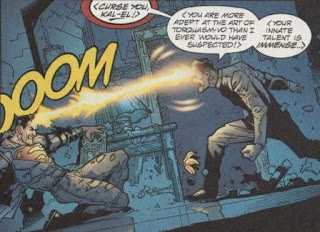 The battle between the Eradicator and Superman rages on, with Superman barely holding his own when Lois returns home. While battling with a new found strength, now that he has to protect Lois from the Eradicator as well, they piece together that one of the Kryptonian artifacts they recently brought back from the Fortress of Solitude must be the cause of the Eradicator's return. 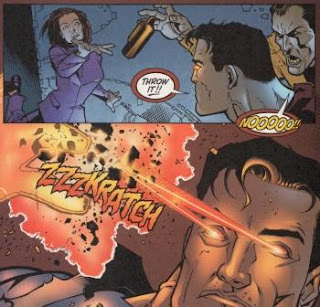 When Lois eventually finds the small statue, she tosses it to Superman who disintegrates it with his heat vision. With the idol destroyed, the illusion of Krypton that the Eradicator had created disperses with him.

With all of the focus on New Krypton in the Superman titles these days, this version of Krypton seems downright alien. I started reading and collecting Superman in the post Byrne era, so this will always be the version of Krypton that comes to mind first, and it was cool seeing it in it's glory once again. The Eradicator just happens to be a perfect villain for this incarnation of Krypton, taking on a Venom-type role as antagonist.

This is a nifty little done-in-one tale that sets up a couple of future sub-plots, and ties up a couple of old ones. Mark Schultz had a great knack for serving the larger storyline that was ever-present in the days of the shield numbering, but he always managed to tell a complete story in it's own right. This issue is no exception, and just serves to remind me that it's been a while since I've reread any of his run.

At this point, I've already heaped enough praise on Doug Mahnke, so I'm just going to let the pictures speak for themselves. But seriously, if you're enjoying what he's doing on Green Lantern these days, you owe it to yourself to go longbox hunting and pick up his Man of Steel and JLA run. It's some really dynamic stuff, and you won't be disappointed.

All characters and artwork reproduced are (c) DC Comics
Posted by TomO. at 9:33 PM