So I'm on a plane back from Chicago after attending Wizard World there some twelve or thirteen years ago, and I'm looking through a stack of Superman back issues that I brought with me on the plane, when one particular cover caught my eye.

Seriously...how could you not see that cover and wonder just what the hell is up with this guy?

It was a fun enough story, and the fascination with Vartox continued apace once I discovered that he actually had other appearances after this one. There's only about a dozen or so, which in all honesty is about 10 more than is probably needed. I kept waiting for someone to realize just how ridiculous that costume was and give him some new duds, but it never happened. The thigh-high boots, yellow striped briefs, and bare-chested vest were here to stay.

Vartox is one of those characters that you like despite themselves. I'm thrilled that Palmiotti, Gray, and Conner where able to find the perfect way to bring this character into the post-crisis world. And before you tell me, I know that he has made an appearance or two since COIE, but he lost a little in translation in trying to make him a serious character. They updated his costume and motivation, but once you take the bare-chested, obnoxiuos blowhard attitude away, he's just another generic alien.

At this point, I've probably shared too much about my fascination with this character, so let's just read the story and move on...

Battle of the Super-Hyper Powers! The story opens up on idyllic Mammoth Mountain, a ski resort popular with the residents of Metropolis. Three such Metropolitans are Clark, Lana, and Steve Lombard as they are spending a relaxing weekend away from the hustle and bustle of the city. Well, two people are relaxing. Clark is playing the bumbling introvert that was required to protect his identity back in the day. 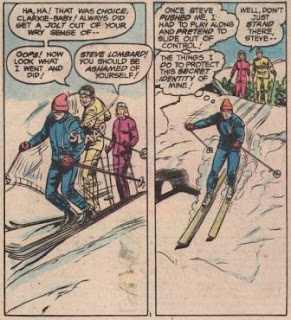 It doesn't take long, however, for the Steve to be obnoxious and inadvertently send Clark careening down the mountainside. Still acting the bumbling oaf, Clark feigns helplessness as he continues to ski down the slope.

Naturally, of course, since this is a pre-crisis Superman book there are a couple of things that happen just in the time to save Superman's secret identity. Not only is there an air force jet careening out of control over the mountain, but also a mysterious figure that flies past in super-speed. 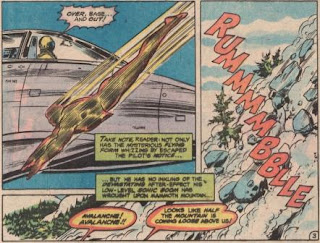 The pilot manages to regain control of his jet, but not before he creates a sonic boom that starts an avalanche on the very mountain that Clark is skiing down! He uses his super-breath to blow Steve out of harm's way before being enveloped by the snow. All is not lost, however, as he just used that opportunity to change into Superman without being seen. 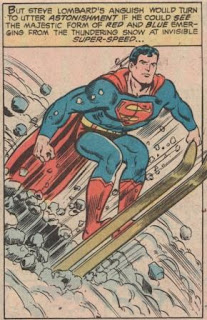 Although if protecting your identity was a big concern you'd probably not want to come bursting through the snow wearing Clark's skis, right?
One dose of heat vision later, and Superman has turned the onslaught of snow into a cloud of steam. The day is saved, but not everything is okay, for in all of the commotion Lana has disappeared!

It doesn't take long for Lana to return however, as she was whisked away by our mysterious flying figure from earlier who just happens to be Vartox! The last time he had visited our planet, they had started a brief relationship only to have Vartox leave for space to find his destiny among the stars in search of a planet to protect as honorably as Superman defends Earth. 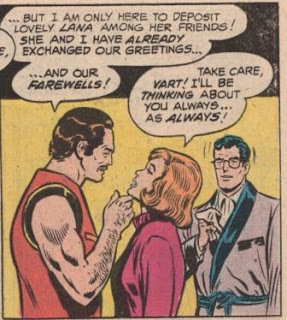 He has returned on this day to say a final, tearful goodbye to Lana as he has found an adoptive planet to protect and call his own, but as they need his talents full time, he won't be able to come back again.

If only this was real life, that would be the end of the story and Lana would be left to nurse an intergalactic broken heart. Thankfully for us, as I mentioned earlier, this is a pre-crisis Superman story so you know the story doesn't end there.

For while Vartox was saying his goodbyes to Lana, his eyes were secretly sending out Hyper-Beams to Clark in a pulsing, mathematical code that explained the true nature of his visit to Earth. 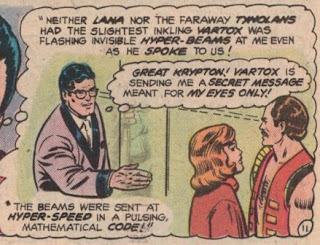 Lana must really be distraught to not notice that while Vartox is saying his final goodbyes to her, he can't keep his eyes off of Clark. That seems like a red flag raiser to me.
So what's the real story? It turns out that the planet that Vartox has adopted and sworn to protect, Tynola, has been using him as a pawn by manufacturing all of the disasters that Vartox has been so busy protecting them from. He created this ruse of saying goodbye to Earth one last time so that he will be able to secretly transmit a message of help to Superman without raising any undo suspicion in the Tynolians.

So off to Tynola Superman goes to play the part of a marauding super-powered being that Vartox will be able to subdue. That way, Superman will be able to help Vartox find out what's going on with the Tynolians from inside their own society. 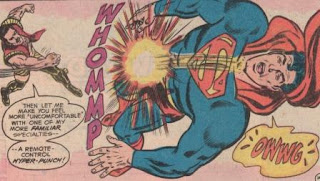 As the cover promised, it's a battle of Super-Powers vs. Hyper-Powers. So what exactly are Hyper-Powers? Who knows, but they are vague enough to let the writers do whatever they feel like doing. In fact, it's this very situation that occurs that allows Vartox to take down Superman once and for all. 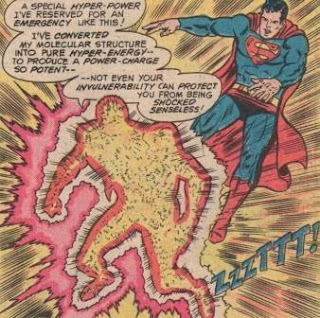 Using a never revealed aspect of his Hyper-Powers, Vartox is able to convert his body into pure Hyper-Energy to produce a power charge potent enough to take down Superman. Now unconscious, Superman is carried off to a prison cell and everything is working according to Vartox's plan. Just how overly-convoluted that plan actually was, you'll just have to wait until the next issue pops up to find out.

Before this issue ends, however, we get a glimpse as to what the Tynolians are up to in luring Vartox to their planet. 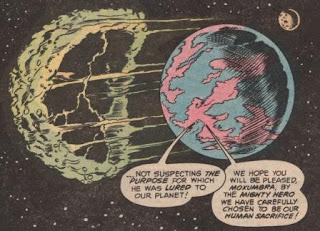 Hey look, kids! It's Galactus from the Fantastic Four: The Rise of the Silver Surfer movie!
It turns out that he was indeed a pawn, one that is going to be sacrificed to the magnificent and wondrous Moxumbra!

What we have here is a pretty typical and textbook Superman story. They have a little fun with his secret identity, explore an overly dramatic love triangle, alien planets, misunderstandings, etc...

You know the drill by now, you either love this stuff or you just don't get it.

Me? I love this stuff and could read 'em all day long.

For those of you similarly afflicted like me, there's more good news. We're not quite done yet. There's a Fabulous World of Krypton back-up co-feature in this issue, so check back tomorrow for a tale of betrayal in ancient Krypton.

All characters and artwork reproduced are (c) DC Comics
Posted by TomO. at 12:01 AM