Now, the West Coast Avengers...I have a lot of love for the West Coast Avengers. The funny thing is though, is that that the title has always been mediocre at best. Aside from the Byrne run in the 40's and 50's, and Roger Stern's original mini-series, I can't really think of another run on this series that sticks out for me. I'd probably give Roy and Dann Thomas the benefit of the doubt for the longevity of their run, and for the fact that they kept a personal favorite of mine around in the form of U.S.Agent.

So why does this title generate so much good will in my collection? First off, I've always assumed for the last decade or so that X-Factor was the first new title launch that I collected as a week-in and week-out comic book buyer. That turns out to not be true, as West Coast Avengers beat it to the punch by almost six months.

I'm sure that's part of it.

The other thing, is that it always featured some of my favorite Avengers.

Vision? I, for one, loved the pale-Byrne Vision.

U.S.Agent? The Damian of the Avengers.

The Great Lakes Avengers? Their debut issue is one of my favorite books from the 80's.

These were all characters that didn't have their own book, so most of the time this title was the only place you could catch 'em.

But we're here to talk about this issue, and to tell you the truth, when I reread it to prepare for this review it turns out that I had literally no memory of this issue whatsoever. I'm sure the only reason that I remember the Mockingbird/Phantom Rider showdown was that it has gotten so much play in the recent issues of Hawkeye & Mockingbird.

So how could this issue have slipped through the cracks so completely, on a title that I generally read month in and month out? Let's find out...

Showtime!
Lost in Space-Time: Conclusion!
As you can tell from the title of this issue, this is the last chapter dealing with a time-strewn team of Avengers. Hawkeye and that gang are stuck in ancient Egypt, while Mockingbird's being stalked in the old west, and the only one that can save them is Hank Pym and some WCA also-rans. And here we get my first clue as to why this issue is such a cypher to me. Hank Pym comes to the Fantastic Four for help, but why he comes dressed in disguise is beyond me. 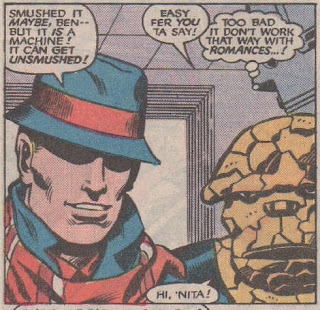 That disguise is so good, it totally made me forget this meeting (or anything else about this issue) ever happened.

But seriously, doc...who told you that Phantom Stranger meets Where's Waldo was a good look? Fortunately for him, that's not the worst costume design in this issue.

With his help, Mr. Fantastic soon fixes up the FF's time machine so that Hank and company can act on a clue left for them by Hawkeye from over 5000 years in the past. Off they go, leaving the FF to look after Hank's fancy new Quinjet that's been outfitted with an artificial intelligence based on a loyal ant that he had known named Korr. 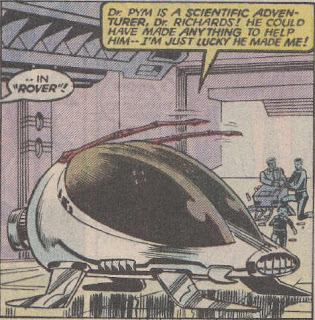 How could I have possibly not remembered that? It just gets curiouser and curiouser.

Now, remember that costume I mentioned earlier? Let's catch up with Avengers in ancient Egypt. 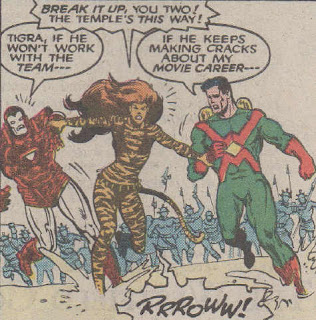 Look at that awesome costume on Wonder Man...and by awesome, I mean horrible.

Anything that makes this look downright dapper by comparison is a lost cause. 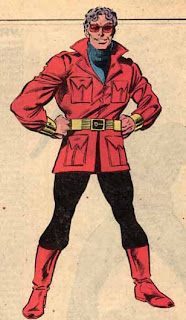 So the Avengers are on the run in Egypt, and end up taking refuge in a local temple. Coincidentally enough, it's the temple of the shunned god Khonshu, patron saint of Moon Knight. Trapped in the temple, with no hope of rescue anytime soon, Hawkeye sets out to build some weapons with which to arm the acolytes for the oncoming siege from the restless natives.

Wait a minute...Did that statue just wink at Hawkeye?
Two pages of tedious recapping of Moon Knight's origin later, we find out exactly why Khonshu was so keen on Hawkeye. He was only using him for his toys. 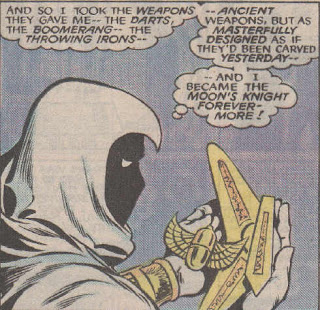 That's right...Hawkeye created the weapons that were handed down millenia later to Moon Knight. How could I have forgotten about something as random, coincidental, and completely out of the blue as that? I actually know the answer to that question, as I've never been able to muster up much enthusiasm for Moon Knight. I'm sure I probably saw these two pages and flipped forward until I got to the good stuff.

And speaking of good stuff, here's Mockingbird having her big throw down with the Phantom Rider. I don't feel quite comfortable cracking wise about her plotline here, so let's let her have her moment of vengeance and move on. 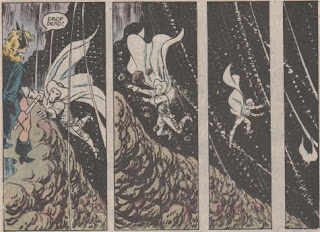 We're back to the present, just in time to catch up with Mr. Fantastic sending Hank Pym, Moon Knight, and Firebird Espirita back to rescue Hawkeye and crew.

It's nice to know that you can always count on Reed to help send you through time when you need it. He may have a snide comment or two about you after you leave, but he's got your back.

Now that we have a working time machine, this issue should be wrapped up in no time. A quick jaunt back to ancient Egypt sees the West Coast Avengers reunited. Unfortunately, most of their reunion is taken up with the Priests of Khonshu speaking gibberish about prophecies and fists and vengeance...and honestly, I just can't be bothered to wrap my head around it.

I'm with you Hawkeye, let's get movin' already.

Trading in his time machine for a form of transportation more appropriate to the old west, Hawkeye swoops in and rescues his girl. 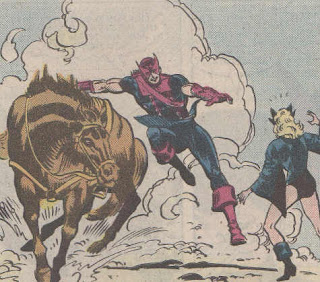 Now, with the team finally reunited as a whole, they're off to the time stream one last time to head back to the present and deliver a good smack down to Dominus for sending them all back to the past in the first place.

A couple of things, actually.

First, don't piss off Mockingbird. She'll take you down. Just ask the Phantom Rider, it's a long way down.

Second, don't underestimate Hawkeye. No sooner are you stuck in the past, and he figures out a way to get help that would do Grant Morrison proud.

Third, don't let Hank Pym or Wonder Man help you with your wardrobe. Ever.

I gave this issue a fair amount of grief during the review, but it wasn't that bad. It's biggest sin is probably that it's decidedly average on most counts. The only aspect of this issue that's had any lasting effect is Mockingbird's story, and that gets a scant four pages. All the rest is Hank and his crew talking about the emotional journey they've been on, and why this time they're good enough, smart enough, and doggone it people like them! And then there's all of that Khonshu nonsense.

So yeah, not much to see here. If you really want to know about Mockingbird's vengeance, pick up the Hawkeye & Mockingbird trade as you'll get a much better story out of it.

All characters and artwork reproduced are (c) Marvel Comics
Posted by TomO. at 11:00 PM