Not much has changed since the Randomizer picked this book from among the random collection of forty books that I picked up during my LCS' Christmas Extravaganza. I still have never read a Satana book, nor do I have a clue who "The Tribe" is that is credited with the art on this book.

I could tell you that Satana is the brother of Daimon Hellstrom, and that this is her first appearance in FULL color, but anyone with google and five minutes of free time could tell you that. Let's just jump right in, ignorant feet first and see what we have in store for us.

Deathsong The tale begins at the ending, as Satana stands at the scene of a horrific car crash, with a smoldering body lying nearby. 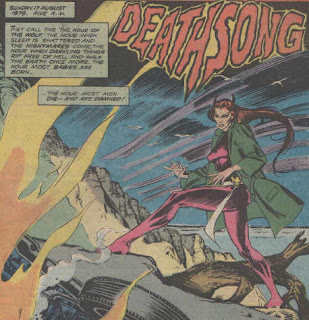 I'm assuming we'll get some explanations on how we got here and what it means, and it would also be nice if we got some answers about just who Satana is at the same time. Although, when the narrator has just as many questions as you, that's never a good sign.

With all of these questions, it's best to go back the beginning, as we catch up with the owner of the smouldering corpse, Deborah Hirsch, as she is on the run from an angry mob. Trying to lose them through the alleyways, she quite literally bumps into Satana, who has been drawn to this town by an occult sixth sense. 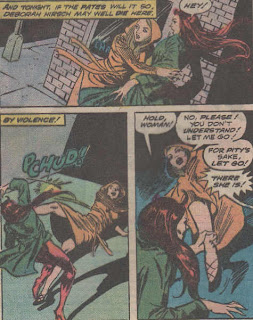 And really, when you bump into a total stranger through your own negligence, what better way to say "excuse me" than with a roundhouse kick to the head!
Unfortunately, her odd sense of decorum does her no good as Satana delays her just long enough for the mob to catch up to her and bind her in chains. Why chains? Because they claim she's a witch, and they intend to burn her at the stake. 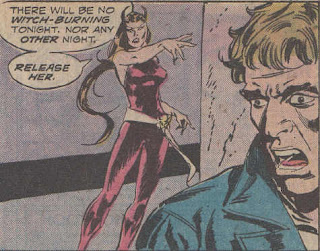 You'd think the devil's daughter would be all for a good witch burning, but not this time. It's time to teach these townspeople some manners, so she makes him grovel like a pig at her feet. 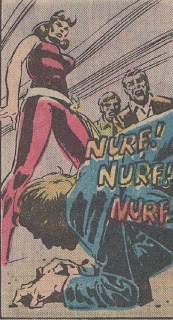 Is "NURF" really the official sound effect for groveling?
As it turns out, she probably should have let them light the blaze as Deborah actually was possessed by the demon Dansker! 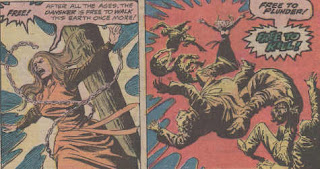 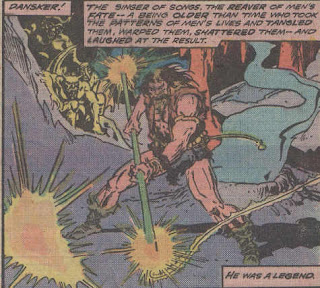 He was also Satana's tutor in the ways of all things demony. Dansker used to rule the Netherlands until Lucifer usurped his command and bound him to his service. One of his chores was to "teach" Satana. The last time they talked was on her graduation day, where she attempted to best him in battle. Unsuccessful, her teacher left her beaten and humbled, vowing that he would always be her better.

Now that the Dansker is free in the mortal world, Satana decides it's time to settle some old scores. First, she needs to find where he has run to after he broke free. One stolen soul later from the last surviving townsperson, and she has her answer. 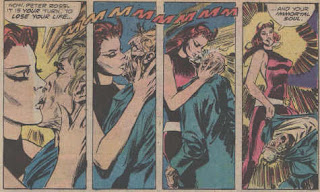 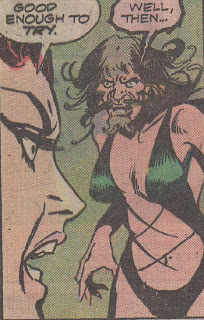 Here's where the story takes a turn into the-- surreal? Comical? Bizarre?

I can't decide, so what do you think?

That, in all of his bearded and bikini'd glory is Dansker. I know this was the seventies and all, and fashion took a certain liberty with common sense, but that's just weird.

You would think that if you have the power to put your head on a body, you could also spare some magical mojo for some more appropriate attire.

You also would've thought that Moondragon would not have taken kindly to someone copping her look. Granted, there's more hair, but tell me Moondragon hasn't wore that same one-piece.

This time, however, Satana is more than able to match Dansker's power. One well placed "SSZZZAA-KOW" later, and Dankser is brought to his knees. 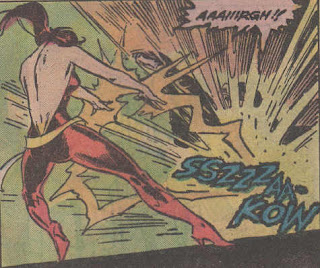 Leaving him humbled and beaten this time, Satana turns his back on him and walks away. Dansker still has a little fight left in him, as he jumps into Deborah's car and tries to run Satana down, which proves the age old adage...if you can't beat 'em with magic, run 'em over with a car! 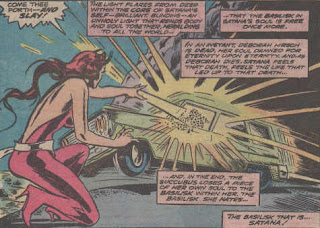 Summoning from the power of the basilisk that lies deep within Satana's soul, she lashes out and incinerates Dansker alive, host body and all. In the end, Deborah Hirsch's death was avenged by Satana. Yeah, she technically burned her body to ashes, but her soul was already damned by Dansker at that time. Someday her final battle with Dansker will come, and she will be able to take a true reckoning...someday...

For all intents and purposes, this is your standard "demon exiled from Hell, trying to find their way in the mortal world" type of story. This particular time around, the demon is the daughter of Lucifer himself. I wouldn't necessarily say she's guided by a sense of justice, but she does appear to have her own roughly admirable moral code to guide her.

Yeah, she avenged an innocent women's death and saved the life of a young boy in the process, but she did it by stealing another man's soul and condemning him to death. And while he wasn't free of guilt himself, he was actually trying to prevent his town from being taken over by demons. Granted, he was using methods straight out of the Salem Witchhunts, but is that a good enough reason to suck his immortal soul dry?

I suppose we'll leave that question to the philosophers and historians to decide.

Apart from the rather silly villain costume, this was a pretty decent issue. Chris Claremont is not a writer I normally associate with done-in-ones, but this one is not bad. There was only one spot where I rolled my eyes at the excessively dramatic narration.

Evil, a living testament to the darkness in men's souls...

Tell me that that description was never used for Apocalypse, or Mr. Sinister, or Magneto.

The art I rather liked as well, as it was very reminiscent of Marvel's house-style for their seventies horror books. It looks like at least two different artists handled this issue, but the transitions are well done and smooth.

As this story draws to a close, I can't say that I'm storming the halls of Marvel demanding she get her own series, but as a random issue read some thirty plus years after it was released, it was entertaining enough.

If you just can't get enough Satana, however, Marvel did us a favor with this issue and reprinted her first appearance from Vampire Tales #2. It's only four pages long, but it's by Roy Thomas and John Romita Sr., so it's worth taking a look at. Check the links out at the bottom of this post, as Pete from The Bronze Age of Blogs has a post that has some nice large scans of all four pages.

Related links for your surfing pleasure...
Posted by TomO. at 10:51 AM