TITLE: Tales of the Green Lantern #1

When I was pulling this particular issue out of the longboxes, I noticed that I only had a few issues from the first Tangent series of books. I thought for sure that I had 'em all, as I remember enjoying these books and I guess I just assumed that I did have the complete collection.

So what were the Tangent books, some of you are no doubt asking?

They were a series of one-shots that explored an alternate earth (now known as Earth-9) where familiar super-hero names were recycled and re-imagined as different characters. This particular take on the heroes was the brainchild of Dan Jurgens, and came from back in they day when DC used to do the occasional 5th week specials, and I remember this being one of the better ones.

The funny thing is, is that I have fond recollections of the concept but beyond the Green Lantern (whom we're going to read about it a second) I have next to no recollection of any of the other characters. The only thing I do recall is that Superman was a black man and the Joker was an anarchist girl. I'm sure we'll get to those issues sooner or later as the Randomizer deems fit, but for now it's all about Green Lantern.

This version of Green Lantern took the concept literally and features a female protagonist who carries an actual lantern on a shephard's hook that emits green light. She wanders in and out of reality, using her powers to give the dead one last chance to make amends among the living, like a cross between the Phantom Stranger and Rod Serling.

James Robinson and J.H. Williams III were responsible for her first appearance, and the concept perfectly fits both of their storytelling styles. For this issue, which is from the second series of Tangent books, they handle the framing sequence while letting a group of other talented creators tell some smaller stories.

With that said, let's travel along with the Green Lantern of Earth-9 as she shines her light into the darkness of men's souls.

Tales of the Green Lantern 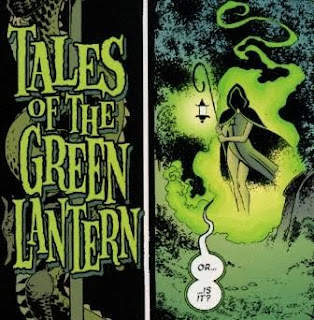 The issue opens up with the Green Lantern talking directly to us, the reader. She breaks the fourth wall to let us know that the stories in this issue are special, as all three of them portend to tell the true origin of the Green Lantern.

Which one is real? Are they all real? Or are none of them?

I guess we'll just have to read on and decide for ourselves.

Brightest Light First up is the story of Lois Lane...Archaeologist, adventurer, and explorer. For this particular tale, she also plays the role of murder victim.

Off the coast of Florida, she has been hired by Booster Gold, a billionaire playboy, to search for lost treasure. What she finds is an irradiated wasteland filled with pitiful creatures of the sea who have already suffered enough by man's hands.

Returning to the surface, she tells Booster Gold that she will have no part of the plunder down below and that he should call of his hunt. Alas, Booster could not be swayed and with the help of his servant, Kilowog, they murder Lois and dump her into the sea.

Falling into the depths of the wasted sea, she is rescued by the same creatures that she showed compassion for earlier. They take her to an underground citadel that is bathed in green light and she emerges as the Green Lantern! 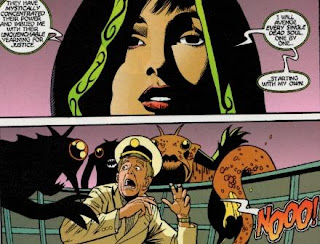 Gifted with a second chance at life, she has vowed to avenge the dead in a quest for justice. Her first act will be to avenge her own murder. Booster is unprepared to deal with an undead shade, nor the sea monsters that she calls from the depths to drag Booster down with them.

Darkest Light The second version of the origin story takes place in the war-torn nation of Czechoslovakia. The ethnic cleansing of one people at the hands of another has given birth to two adversaries who continue to fight the battles of the past to this day. 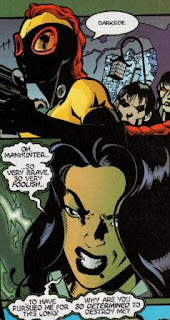 Manhunter has risen to avenge the deaths of her people who have died in the ethnic camps of Darkside!

Manhunter uses the tools of man to bring them to justice, while Darkside has taken the mystical power of a green orb with which she can raise the dead to do her bidding.

In the midst of their epic and final battle, Manhunter's mind wanders to the train of events that led her here. After the war, it was assumed that Darkside was finished, but Manhunter knew better. She spent her time hunting her and eventually tracked her down, living a quite life under a false identity. She quickly kills the mass murderer, only to find out that Darkside still lives and has resurfaced back in Czechoslovakia. Now with the guilt of an innocent victim on her conscience, she has returned to hunt down Darkside once and for all. 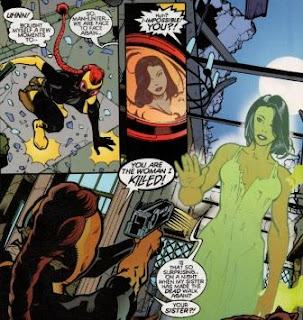 Back in the present, Manhunter is running low on ammo working her way through the hordes of zombies that Darkside is sending her way. It's then, that she sees the ghost of the innocent girl that she had gunned down earlier by mistake. It turns out the dead woman is Darkside's sister, who had fled to try to build a life far from the evil influence of her mad sister.

The dead woman is not here for vengeance, however, as she sees a chance to end her sisters villainy once and for all. As the sisters are locked in a mystic battle, Manhunter comes from the shadows swinging a lantern that she is using as a makeshift club. 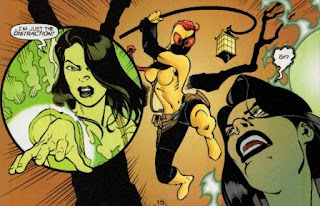 Darkside's mystic orb is shattered, along with Darkside herself, leaving behind only the green energy which her sister collects and store it in the lantern that Manhunter had used. With her sister defeated for good, the Green Lantern will now become a shining beacon of hope for all those that have been wronged. 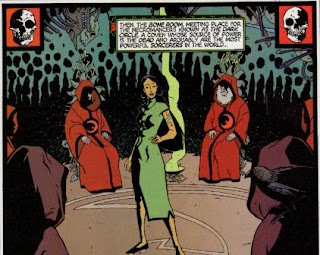 The last tale in our trilogy of origins centers on a brash, young sorceress Zatanna. She has tracked down the powerful sorcerers that make up the Dark Circle and is demanding a place in their coven.

Filled with the likes of Etrigan, Rha's al Ghul, the Creeper, and Madame X'Al, they are disdainful of this young upstart who would dictate to them her place in their circle. They send her on a fool's errand, promising her a place in the circle if she brings the legendary Green Lantern to them. They have no intention of allowing her into the circle, for they know full well that it will lead to her damnation. 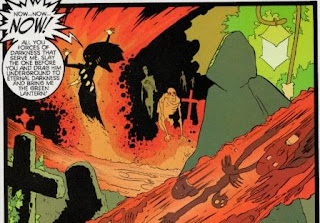 Determined as always, she is successful in tracking it and it's current wielder Jason Blood. During her attack, her spells are redirected back at her causing her body to perish and her sould to wander.

That actually turns out to be an opportunity for both Zatanna and Jason Blood. The lantern, it turns out, controls the wielder to give life to the restless dead so that they can find final peace.

For years Jason Blood has held this duty, but the lantern senses a soul more in need of guidance than his. Now bonded with the lantern, Zatanna has become the new Green Lantern, allowing the soul of Jason Blood to finally find peace. 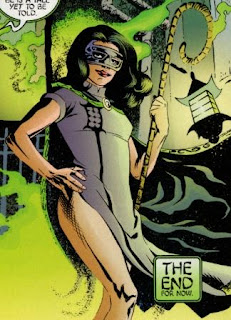 So there you have it. Three lives lost with three tales of revenge and redemption. Are any of these the true origin of the Green Lantern? We'll never know, for there are more mausoleum's filled with the dead who need justice as well, and this Green Lantern has no more time for memories that may or may not be hers.

It seems that at times alternate versions of existing characters are a dime-a-dozen. The best ones are complete re-imaginings of the core concept, above and beyond just slapping a goatee on the character and calling it a day.

This was one of the better ones, as James Robinson, J.H. Williams III, and Dan Jurgens have taken the Green Lantern name and completely re-worked it. I like the concept and the structure of this title, as it gives a wide latitude to tell a variety of stories. It's a perfect structure for an anthology title, reminiscent of The House of Secrets and The House of Mystery. It's a shame that there's just not a market to warrant the return of this title as an ongoing, as I'd love to see it smack dab in the middle of the DCU.

Alas, in the meantime I have Vertigo's House of Mystery to keep me entertained. In the world of consolation prizes, you can't do much better than that.

Related links for your surfing pleasure...
Posted by TomO. at 10:34 PM