First off, a quick note on something that I didn't remember. Take a look at that value...32 pages for a buck! Even for 1985, that was a relatively good deal. Of course, this was back in the day when we had the luxury to not care about page counts and price. Nowadays, with comics creeping up to four bucks a pop, I find myself putting the 22 pagers at that price point back on the shelf.

Anyways, it's time we started talking about the glory that is Judge Dredd instead of modern day cover prices.

Judge Dredd is one of the fondest memories I have of my early collecting days. I remember browsing the rack and seeing this cover, and thought...that deserves another look. And boy, am I glad I did!

At the time, I was reading just The Avengers and The Uncanny X-Men so this was my first foray out of the super-hero realm. I knew next to nothing about the history of the character, or the story behind it, but it looked cool and was definitely different enough from what I was reading to warrant a "eh, what the heck" purchase.

Needless to say, that with my next trip to the comic book store I was back issue hunting for a new title.

Enough about me, let's see if the actual book lives up to my unexpectedly high, 25 year old expectations.

The Fink!
So as you can probably tell from the cover, there is something prowling the sewers of Mega-City One...and it has come to kill! 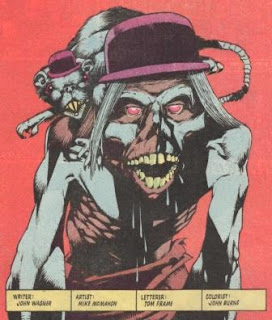 Yes, it's everyone's favorite member of the Angel gang, the Fink and his pet rat!

Just who is the Angel gang, and the Fink in particular, we'll get to in a minute. For right now, he's got a job to do and that would appear to be hunting down Judges.

The first one on his list is Judge Larter, who succumbs to the paralyzing effect of Fink's poisons. Helpless and immobile, the Fink drags him back into the sewers where he is soon devoured by a pack of rats called forth by Ratty.

Back at the Fink's lair, we see that there are two more names on his list of Judges marked for termination...Hershey and Dredd. With one Judge down, it's back to the surface world for the other two.

Judge Dredd, meanwhile, has been called to the scene of Judge Larter's gruesome murder and finds a calling card that Fink has left for him...a crude drawing of an angel next to his name. It doesn't take him long to figure out that one of his old cases may be coming back to haunt him, as there appears to be a survivor of the Angel gang running around.

From the shadows, the Fink uses his sling to poison random citizens and soon has the attention of the next Judge on his list. Just as Judge Dredd is about to warn Judge Hershey over the radio, she is beset upon by Fink.

She's tougher than he expects and soon has the upper hand. Not to worry though, as Ratty comes through and attacks her face, giving the Fink time to administer his paralyzing poison to the second Judge on his list.

Judge Dredd arrives just as Fink is packing Judge Hershey up in a body bag so that he can take her back to his lair...and the chase is on. It's a short one, however, as Fink dumps his poison in a local pool full of innocent civilians. While Judge Dredd calls for medical help over his radio, Fink and Ratty escape with their captive judge in tow.

While waiting for the cover of darkness for his next move, Fink takes a stroll down memory lane to remember his family, and more importantly, just why he is on a mission of vengeance in Mega-City. 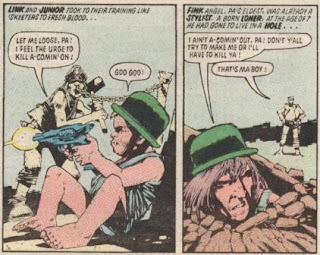 Fink was the oldest son of Ma and Pa Angel. Ma died after giving birth to four boys, leaving Pa to take on the task of raising them to be the most vicious, orneriest, and baddest family the world has ever seen. They are from Texas, after all, so everything has to be bigger and badder...and more ornery!

Of the four boys, Fink is the loner of the group and spends most of his time hiding in holes in the ground. Tiring of the family life, he heads out the cursed earth that surrounds Texas. It's there that he uses his love of poison to catch unsuspecting travelers that stop at his various watering holes.

The time out in the radiation of the cursed earth takes its toll on Fink, and soon turn him into something beyond human. Years pass, and with his new cursed earth rat sidekick, he heads to Mega-City One when he hears that Judges have killed his family. That story can be found in a mini-series that was out earlier from Eagle Comics called Judge Dredd: The Judge Child Quest.

Back to the present, and as night has fallen, the Fink emerges from the sewers with the paralyzed Judge Hershey over his shoulder. He has something special planned for her, and soon makes his way to a monstrous recycling plant.

Being a Judge Dredd book, this is no ordinary recycling plant, for here they recycle dead bodies. In a city where eleven million people die a year, they have turned funerals into a mass production line of efficiency. 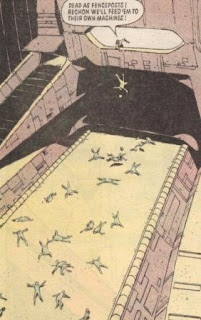 Great, now I'm going to get even more google searches from the conveyor belt fan-fic crowd. Click here if you're confused.
Killing his way to the control room of the massive facility, Fink hurls Judge Hershey down onto the massive conveyor belt which leads to recycling chambers. Fortunately for her, Judge Dredd has heard about the disturbance at the plant and shows up just as Judge Hershey is about to swallowed up by the machine.

Dodging Fink's poison missiles, Judge Dredd drives his mega-cycle through the complex and reaches the control room, shutting it down just as Judge Hershey is about to be disassembled alive. Now that she's relatively safe, Judge Dredd heads into the bowls of the machinery to hunt down Fink himself.

Ratty is the first one to strike, jumping at Dredd from the shadows. Never skipping a beat, Dredd grabs the rat and begins to drown him in the knee deep decomposing fluid of the recycling plant.

While Dredd deals with his rat, Fink jumps out and stabs him in the shoulder with a poisoned dagger. Using the last of his strength, Dredd reaches up and uses Ratty as a weapon, forcing him to bite his own master. 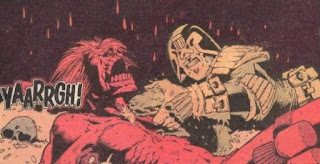 As anyone knows, one bite from a cursed earth rat is lethal. So as Fink's paralyzing poison begins to take it's effect on Dredd, Fink is laid low by the one thing in the world that he ever cared for.

Don't shed too many tears for our old pal Fink however, for as his years out in the cursed earth changed him and he survived the rat bite. He's later sentenced to life imprisonment in an isolation cube. Although knowing his prediliction for living in holes, he's probably very content. 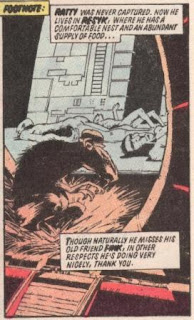 There's also a bit of a happy ending for Ratty as well, for he also survived his encounter with Judge Dredd, and now lives happily ever after in the recycling plant where he now has an abundant food supply brought to his doorstop on a never-ending conveyor belt of cadavers!

Ahhh, Judge Dredd...how I've missed you. Reading this issue again makes me wonder why I ever stopped in the early 90's. I blame the X-Men and their takeover of my reading habits around this time.

I've always had a fondness for stories featuring over-the-top violence mixed with dark humor. I realize that makes me sound a little crazy, or a touch sociopathic, but there's something about movies like A Clockwork Orange or comics like Preacher or Hitman that are strangely captivating.

It has been so long since I've read any Judge Dredd books that I forgot how much this book was in that vein. In fact, it makes me wonder why, with the success of Hitman and Preacher, no publisher was willing to capitalize on that to try and reintroduce Dredd to an American audience. It seems like a no-brainer to me re-reading this issue now.

I guess it's all Stallone's fault...or so I've heard, as I've never seen the movie. Thank goodness for small favors.

And since I've already mentioned Garth Ennis and Preacher, I might as well point out the obvious influence that Judge Dredd must have had on him. In this story alone we not only have the sick, twisted, and morally-bankrupt family unit that has become an Ennis trademark in his books, but as an added bonus they're from Texas too!

This book actually has one more six page story in it, but we'll save that for tomorrow. It's late, and I don't want to overdo it, getting back into the swing of things.

All characters and artwork reproduced are (c) Eagle Comics
Posted by TomO. at 10:50 PM