I've already written previously (and not that long ago) about my history with The Defenders. But this is The New Defenders, so it could only be bigger and better...right? 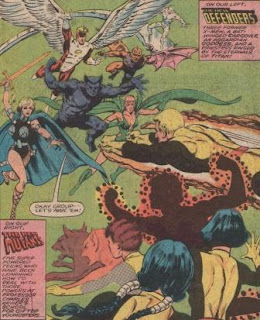 The story starts in the middle of a battle between the New Mutants and the New Defenders. The scene? Professor's School for Gifted Youngsters. Why they're fighting, we're not so sure, but for three fifths of the Defenders it's a reluctant battle.

Angel, Iceman, and the Beast are understandably going easy on the latest crew of young mutants being trained by their old teacher, Professor Xavier. The same can not be said of Valkyrie, who seems to be possessed with a blood lust befitting a true Norse warrior. It's only after she runs her blade through Wolfsbane and is about to deliver the death blow when Moondragon intercedes.

She has been studying the situation and has come to the conclusion that none of this is real.

Using her powerful mental abilities, she shatters the illusion and we find out what has really been going on. The Defenders have been caught by the Secret Empire and are being subjected to their mind ripper machine in what has been so far, a futile attempt to brainwash them. 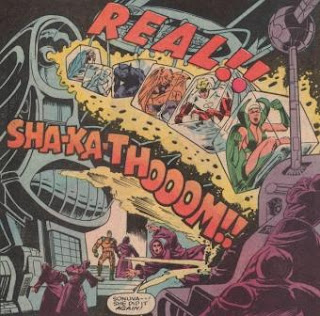 The leader of the Secret Empire, Professor Power, wishes to use the brainwashed Defenders to hunt down and kill the New Mutants in an attempt to gain revenge against Professor Xavier.

Like any good megalomaniac, would-be world conquering super-villain, Professor Power has more than one scheme going on.

While he pursues his vendetta against Professor X, he also has his sights on something rather larger...the creation of a perfect Utopia on Earth after civilization has been purged in a nuclear war of his prodding.

It all involves the launching of a satellite that will beam subliminal messages, inciting the leaders of the free world into all out nuclear war. 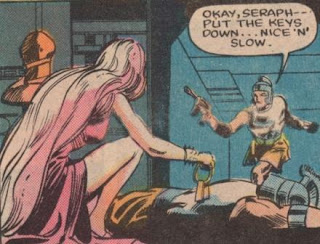 In another part of the Secret Empire's base, a lone figure strides the hallways. Her name is Seraph, and she is a trusted member of the organization. Unfortunately, she's also been working as a double agent for the Soviets as well and the time to disrupt Professor Power's evil scheme is now.

Freeing another captive of the Secret Empire, they manage to wreak enough havoc that the Defenders are able to use the ensuing chaos to their advantage and break free from the mind ripper device.

One short rendezvous later, and they are working together to disrupt the ensuing launch of the brain-washing satellite rocket. 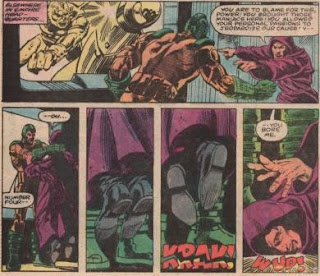 Professor Power, realizing that he is losing the upper hand, disposes of some disloyal society members and makes good his escape. He seems unconcerned about the pending rocket launch, for if the Defenders stop it, he has other plans in motion to achieve his ultimate goal of a perfect society under his control.

Speaking of that same rocket, the Defenders can't afford to be as blase about it's pending liftoff. Racing to the launch pad, they're seconds too late as the rocket begins the final ten seconds of it's countdown. 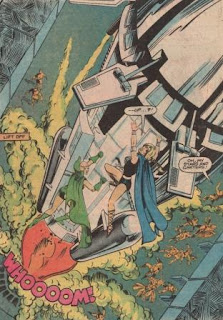 Valkyrie and Moondragon, determined not to let the rocket take off successfully, do their best Captain America and Bucky impersonation as they are lifted skyward.

Like most books that have been around for a long time, the book we're reading in 1984 is a far cry from the issue we've read previously from 1977. Where before, we had a somewhat melodramatic book about a group of misfit superheroes, this time around we have a relatively straightforward team book of B and C list characters. It' a different dynamic, and it loses most of the charm that it had held previously.

That's not to say that issue was bad, it was just kinda boring. The villainous plot by Professor Power was pretty much by the book comic book villainy. The dynamics of the team lacked any real tension, with the only drama coming from the Beast's monologues about having second thoughts about bringing this team together.

The only real highlight of this issue was watching the ladies come to the forefront. Moondragon and Valkyrie are the real strength of this issue, and they make for an interesting dynamic in how they play off of each other. The restrained and controlled demeanor of Moondragon contrasts nicely against the action-oriented and emotional Valkyrie.

I'm still intrigued about the idea of the Defenders as a series, but I think I'm going to stick with the 70's stuff for right now.

Related links for your surfing pleasure...
Posted by TomO. at 9:05 PM