We're finishing up the last of the three reprints from Giant-Size Marvel Triple Action #2, so there's not a whole lot of new insight to bring to the preamble at this point.

Steve Ditko makes his reappearance here the Random Longbox, after being absent for more than a year. He's illustrating a Dr. Strange story this time around, which makes me downright giddy. Throw in the fact that we'll get to see his version of Thor as well, and I may not be able to concentrate enough to do the review.

Sorry for the bit of excess hyperbole, all of these Stan Lee issues in a row must be rubbing off on me.

My apologies also to anyone who stumbles upon this review after googling the issue number, looking to read about the debut of the Beetle. We're technically reviewing the Giant-Size Marvel Triple Action #2 and it only includes the Dr. Strange story, not the Human Torch and Thing team-up against the Beetle. And not to get too sidetracked, but I just googled the original cover and boy did the Beetle have an awesomely retro costume. It makes me sad that that's not the one I'm familiar with from my reading.

"The Challenge of Loki!" So what did George do to piss off Stan this month that he didn't get a merry Marvel moniker added to his credit?

It's an average day in the Sanctum Santorum that finds Dr. Strange practicing the mystic arts that make him the Sorcerer Supreme. Unfortunately for the good doctor, he's being watched by none other than Loki, the Asgardian God of Lies! With Loki forced to stay on Asgard by Odin himself, he needs to dupe somebody else into doing his dirty work for him. Who better than a mere mortal like Dr. Strange.

Using his spirit type, Loki appears before Dr. Strange to plead for his help. Appearing in chains, he explains to Dr. Strange that Thor has been fooling everybody into thinking he's a force for justice. In reality, he's been plotting to conquer mankind. Only Loki stands in his way, if only he wasn't bound by these damnable chains he could act to stop Thor! 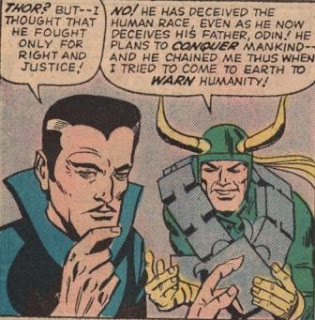 Hmmm...who to trust...the god of lies or a founding member of the world's premier super-hero team?
A quick check with doc's magic amulet, and he can feel the evil in those chains. Loki explains that only the hammer of Thor can set him free, and he appeals to Dr. Strange to use his mystical powers to snatch it from the god of thunder.

Using a sliver of the leather handle that Loki has stolen from Thor long ago as an anchor of sorts, Dr. Strange calls upon Dormammu, Vishanti, and the Hosts of Hoggoth to create a giant mechanical hand that goes forth to steal the mighty Mjolnar. 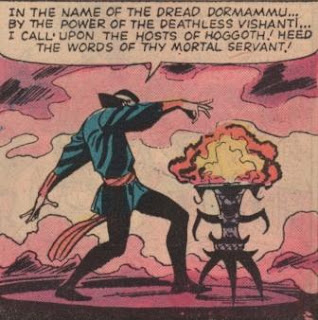 While Loki is distracted by the sight of Thor falling to his death without his hammer to keep him aloft, Dr. Strange does a little investigating of his own. His magical amulet reveals that there is no evil to be found in the strand of leather from the handle of Mjolnar. The evil coming from the chains that he sensed earlier could not have come from Thor, so it must be Loki up to his old tricks. 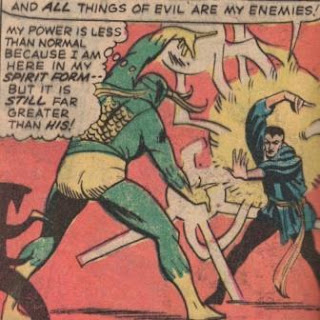 An epic battle breaks out between a Sorcerer Supreme and an Asgardian god. Neither are able to gain the upper hand, until Loki pulls out a secret weapon. 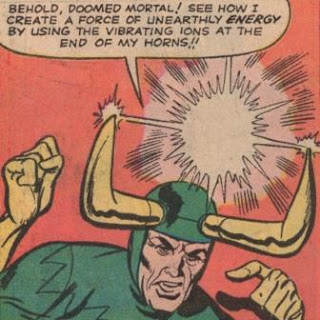 So that's what those comically oversized horns are for on that helmet. And here I thought Loki was just overcompensating all these years.
Using the energy bands generated by his horns, Loki traps Dr. Strange in a shimmering cage. Calling upon the might of his amulet once again, Dr. Strange is able to counteract Loki's energy bands with a little light show all his own. When all of the smoke clears, there stands six separate sorcerers supreme! 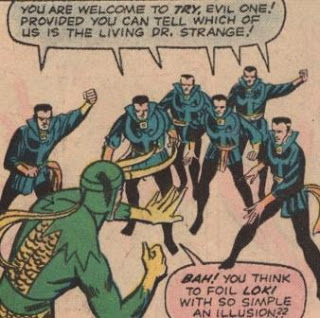 While Loki is distracted in dealing with the duplicate Dr. Strange's, the real deal uses his astral form to sneak up behind Loki and reverse the spell which he used to steal Thor's hammer. With Thor now reunited with Mjolnar, and closing fast on the Sanctum Santorum, Loki realizes that the jig is up and he beats a hasty retreat back to Asgard.

With Loki no longer on Midgard, the hammer of Thor senses no further disruptions, and Thor continues on his way unaware of the battle that just transpired in which he was just a pawn. Doctor Strange, meanwhile, ponders the fact that he just barely beat a god and wonders what's to happen when next they meet.

I love seeing heroes go up against villains outside their wheelhouse. You'd think that Loki would be a natural villain for Doctor Strange to match wits with, but from what I can tell there confrontations have been fairly limited. There's this story, an early appearance in Dr. Strange, and a three-parter in The Defenders (there are those pesky Defenders again, I swear I just need to bite the bullet and buy a complete run).

This story is rather simple, but it was fun seeing the two go toe-to-toe with the fancy light shows and contorted hand signs. The fact that Steve Ditko supplies the visuals makes the battle look more dramatic than it probably was.

Thor's appearance was altogether too brief, which basically just teased us with Ditko's versions of the Norse gods. His Doctor Strange is the real draw, and we got a nice three page battle out of it.

All in all, this is a great little 8-pager from the glory days of Marvel's Silver Age.

Related links for your surfing pleasure...
Posted by TomO. at 3:46 PM