We finally get an official Thor book to read and I'm kind of ambivalent, to tell you the truth. I love Thor, and I love reading Thor comics, but he is one of those concepts where I don't like reading mediocre Thor comics. On the opposite spectrum, there are some characters like Superman that I like so much, I'll read their crappy issues all day long. That's a good thing, as it appears I have a year's worth of wandering and pontificating Superman to look forward to.

Thor, on the other hand, has a lot shorter leash with me. Luckily for us, we've had some stellar Thor runs over the years, unfortunately for us, this issue falls squarely in the "meh" era.

Tom DeFalco and Ron Frenz put in quite a lengthy run on The Mighty Thor, working on close to six years worth of issues together. The first two or three years of their run I remember fondly and have a lot of time for. The Eric Masterston/Thunderstrike stuff never really paid off for me, and I honestly didn't think I had that many issues in my collection.

Which leads me to the other thing that has me dragging my feet reading this issue. It was the 90's and speculation ruled the day, so I'm sure the fact that Ghost Rider guest stars is the reason I have this issue. I've long since soured on him as a character, so this is going to be a tough one.

Let's just get it over with.

The God, The Ghost, And The Guilty! This issues starts off like any comic worth its salt should...in an abandoned factory. 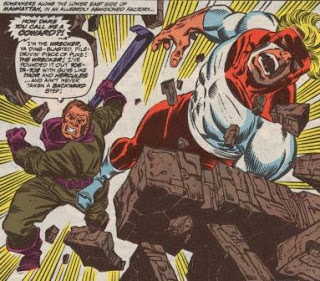 And like any good Marvel book, there's a couple of team-mates beating up on each other. This time around it's the Wrecker exerting a little tough love on his Wrecking Crew.

It seems that last issue saw the Wrecking Crew mix it up with Ghost Rider when Mephisto suddenly appeared. What they were doing screwing around in Thor's book is anybody's guess. For some reason that spooked the Wrecker, who quickly transported the crew away. Back at their base of operations, Bulldozer calls him on it and the Wrecker doesn't take too kindly being called yellow.

The Wrecker is not the only one concerned about Mephisto, as both Ghost Rider and Loki ruminate about what his sudden appearance means. While Ghost Rider can only ponder the situation while he motors around town, Loki decides to pay the Prince of Lies a personal visit.

While discussing the reappearance of the Ghost Rider, it is revealed that Mephisto has actually set his sights on a particular immortal soul and that an alliance might be in order.

Back on the mortal plane, we finally check in with the star of the book as Eric Masterton is being confronted by two of his friends who claim to know his secret. Luckily for him, they just think he's an alcoholic, not the Asgardian God of Thunder. 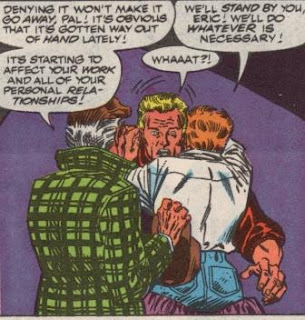 The tension is soon broken by the arrival of Eric's ex-wife and son, who interrupt the make-shift intervention. The fact that one of his friends carries a small torch for Eric just makes the whole scene more awkward than it needed to be. Honestly, it's a little hokey and comes across as a bad episode of As The Midgard Turns. 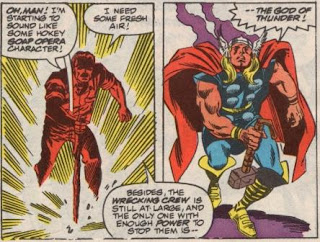 You said it pal, not me! Well maybe I did, but I'm just glad we can move on now and let's get to the action.
Still nursing his bruised ego from earlier, the Wrecker takes advantage of Thor's nightly patrol and decides to give the boys some action. They'll take down Thor, and then finish the job they started previously with Ghost Rider. An ambush is set, and Thor soon finds himself on the receiving end of a ton of bricks.

One well-phrased "I say thee nay" later, and Thor is back on top going toe-to-toe with the Wrecker and his Wrecking Crew. Loki does some scheming of his own and manipulates the Ghost Rider to show up as well. 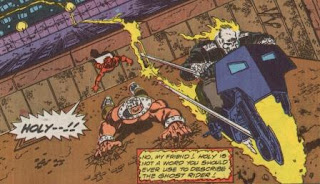 As the battle rages on, Loki takes advantage of the confusion to strip the Asgardian power from each member of the Wrecking Crew that was stolen from him at an earlier date. Eventually, it's just the Wrecker and Bulldozer left standing when the Wrecker decides to use his crowbar to send the two heroes into another dimension.

Little does he know that he's falling right into Loki's plans, as Loki redirects the Asgardian energy emitted from the crowbar to open up a doorway into Mephisto's realm.

While Thor and Ghost Rider mop up the demons, Loki is able to drain the last of his Asgardian energy that still remains within the Wrecker and Bulldozer. He leaves the comatose bodies of the Wrecking Crew for Thor to deal with, while taking the unconscious Wrecker back to Asgard with him to toy with at his leisure.

With the crisis averted, Ghost Riders leaves Thor to do all of the clean-up work as he rides off wondering to himself why the demons from Mephisto's realm looked so familiar to him. While we're speaking of Mephisto, he makes one final appearance as it's revealed that the immortal soul he is after is none other than Thor's, but I'm going to guess that the sharper readers among you have probably already figured that out.

Unfortunately, nothing much. Or at least nothing that makes me change the opinions I had going into this story. It's an average issue in an average run of Thor issues.

Technically, it's well done as the pacing and plot move along nicely. The dual schemers of Loki and Mephisto work off of each other nicely, but are never really given enough interaction this issue.

The fight with the Wrecking Crew was all right, but lacked any real tension. I never got the sense that it was going to turn out any other way than it did, which is a shame, as with Loki in the mix there should be some semblance of unpredictability to it. Thor and Ghost Rider barely seem to notice each other during the fight, making the whole pretense of the "team-up" seem mildly forced.

There were two other things that really stood out for me, that I didn't remember or notice the first time through. First, the drama with Eric's social life was so over the top I kept waiting for Conando to come bursting through the door. Alas, he didn't, and the comic was worse off for it as it tried to play the drama seriously.

Second, the coloring was really garish throughout this whole issue. There was zero subtlety or shading to it, and it just jumped out and punched you in the eyes with every other panel. It was a good thing for Thor that computer colors were just around the corner.

With all that said, I'm still looking forward to the next time Thor shows up, but would it kill the Randomizer to give me a little Kirby or Simonson?

Related links for your surfing pleasure...
Posted by TomO. at 7:32 AM