This is the second story that makes up the "triple" part of the Giant-Size Marvel Triple Action #2 that we started reading earlier in the week. This time around, we get a story from the early years of Daredevil's title.

This is definitely going to be the oldest Daredevil story that I've ever read, as I can't recall ever reading a Daredevil issue from before Frank Miller came on board. So yeah, my history with the character is spotty at best, so we're going into this one cold.

The Trap Is Sprung The story picks up with Daredevil held captive by the Owl in a giant birdcage. All the action happened in the previous issue, but thankfully we're given a brief recap before we get to the meat of the issue. 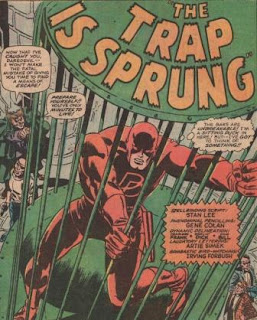 It seems that the Owl had forced Matt Murdock to act as counsel in a trial, defending an ex-judge, where the Owl and his thugs were judge and jury. Sometime during a break in the proceedings, Matt was able to change to Daredevil and promptly got himself caught.

Let's take a quick sidebar here to play a little Super-Hero/Super-Villain association game. We'll name a super-hero, and I'll reply with the first super-villain that comes to mind.
The Owl? Really?

Yep. You'd think it would be the Kingpin, Elektra, or Bullseye, but for some reason I just always think of the Owl. I assumed it was because he debuted in the first issue along with Daredevil, but he didn't make his first appearance until the third issue. In fact, outside of Bendis' run, I can't recall ever reading an Owl story.

Now I'm curious to actually read this issue to see just what's up with the Owl, and find out what's so special about him to become linked so prominently to Daredevil in my mind. Now, back to the review.

Using his special powers to be able to glide on the slightest breeze, the Owl soars to the top of the cavernous chamber were he has hung the captive Daredevil. 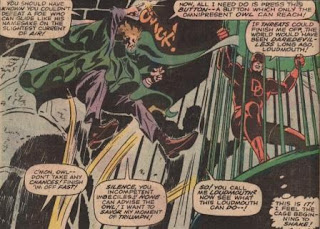 With the press of a button, Daredevil goes careening towards a bottomless pit. The Owl has worked up a "by-the-numbers" Silver Age death-trap, so not only does the hanging cage have a retractable floor that will send Daredevil to his death, but the bars are heated which prevents him from holding on for dear life.

Unfortunately for the Owl, he forgot to take away Daredevil's billy clubs when he locked him up, as he's easily able to use its grappling hook to hook the cable above and swing himself up and out of the deathtrap. 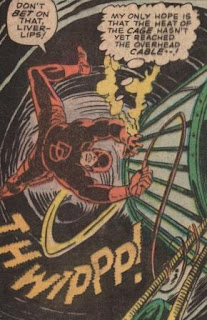 The Owl sics a couple of his generic thugs on Daredevil, but they are easily dispatched as he lassos the Owl with his billy club and sends him careening into his own men.

It's still too early to count the Owl out just yet however, as he has a back-up death-trap ready to go. All he has to do is lure Daredevil into the Forbidden Chamber! 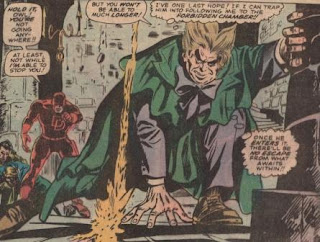 So the chase is on, as the Owl leads Daredevil ever further throughout the labyrinthine passages that go farther and farther down. While this is happening, the very base that they're running through is being rocked by explosions from a nearby volcano.

Hopefully that forbidden chamber has a good safe room.

The Owl is able to use his uncanny gliding powers to keep one step ahead of the determined Daredevil. Inside the dreaded forbidden chamber, we get a glimpse of the Owl's secret weapon...a giant-sized electronic owl! 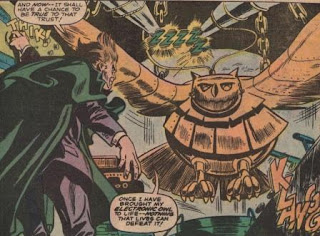 It may look bumbling and slow, but that's not the case as the speed and dexterity of its swooping attacks keep Daredevil from apprehending the owl. He still manages to throw a carefully aimed billy club at the control panel, which soon sends the mechanical owl careening out of control.

At this same time, the volcanic island base is rocked by another explosion which starts to bring the fortress down around their heads. Normally, this would be a bad turn of events, but lucky for the two of them there's a wild and out of control mechanical owl that they can hijack to take them away from the crumbling headquarters. 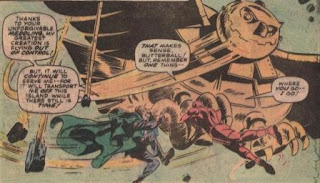 The momentum of the fight now changes hands, as the sky is definitely the Owl's milieu. His gliding powers give him the edge, as he can dance around on the surface of the mechanical owl while Daredevil is forced to hold on for dear life.

Daredevil didn't get to be the Man With No Fear by hiding from a challenge, so when the Owl lunges for him he lurches to the side, causing the Owl to fall from the safety of his mechanical namesake.

If you give the Owl some lemons however, he'll just make some lemonade. You see, he can use his gliding power to reach the mainland while Daredevil will plunge to his certain doom on the back of his crippled electronic owl.

You know you can't count Daredevil out that easily, however, so while this is the last we see of the Owl, our hero still has to rescue the judge from the crumbling island base. Using his senses to feel the subtle shifts in the wind currents, he's able to shift his weight and control the electronic owl. Flying back to the island, he's able to rescue the judge as the island explodes in the background. 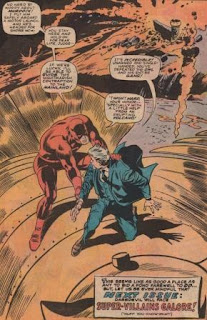 There was something odd about this issue, as we read the whole thing and The Official Stan Lee Hyperbole Meter (that we introduced last review) never went off once! By rights, that should've sent it into the red right there.

This issue came out a month later than the Avengers issue that we just read, but it feels like it was written by a completely different person. It's probably just the nature of the story being told, as this one is almost all action with nary a ham-fisted, moral lesson in sight. The story is better for it, and was actually pretty fun.

I may have to rethink my position on Daredevil, as I never considered myself a big fan but this makes two Daredevil books that the Randomizer has picked that I enjoyed quite a bit. Now that I think about it, they're both essentially the same story, with Daredevil avoiding the thugs and death-traps of the issues villain. It makes sense, as his enhanced senses provide plenty of opportunity to escape from the impossible with panache.

For this story, the villain was the Owl, and I can't say that I really now him any better than I did before I read this. His only super-power appeared to be the awesome ability to glide. Other than that, he relied pretty heavily on his henchmen and inventions to do the dirty work. I'm not sure if I immediately think of an owl when I hear those attributes, but it was the sixties and everyone needed a shtick.

Gene Colan handles the art here, and he gives the story a quick pace and lots of fluidity to the artwork. It doesn't remind me at all of the early Marvel, Kirby work that I instantly think of when someone mentions a silver age Marvel book. Even the fact that this issue had three inkers didn't detract from the pencils.

So there you have it. We've looked at two out of the three stories from Giant-Size Marvel Triple Action #2 and came up with one winner and one not-winner. It'll be up to Dr. Strange and Thor to break the tie, as their half of Strange Tales #123 closes out the issue.

All characters and artwork reproduced are (c) Marvel Comics
Posted by TomO. at 7:31 PM