I think my love for this title is entirely based on the premise of what it could have been, rather than what it ended up being. On paper, this seemed like a sure thing. You have what is essentially a Hawkeye solo-series mashed together with a second story featuring past and current Avengers who didn't have their own title.

All right, on second thought maybe that isn't necessarily the text book example of what a hit series could be. Hawkeye solo series don't have a track record of lengthy runs, with this title being the exception to the rule. As for the second story, whether you call them co-features or two-in-ones or anthologies, there's just no getting around the "not necessary" or "filler" label that so often plagues them.

No matter...in my perfect world this title would've just celebrated its 250th issue. But it didn't make it to its sestercentennial issue, it only made it to number forty.

That's right, this issue was the last one for Avengers Spotlight. The last four issues of the title broke format slightly and where single issue stories about characters other than Hawkeye. This particular one focuses on my all-time favorite Avenger, the Vision!

The fact that I don't remember anything about it other than the awesome cover by Steve Lightle doesn't bode well for this issue. Let's get reading and see what's up. 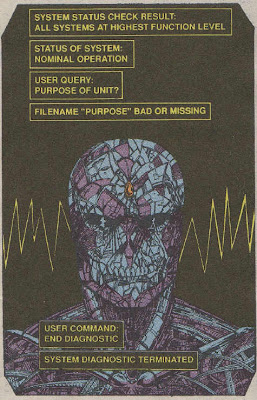 Three pages of pseudo-computer tech speak is not necessarily the best way to set the excitement for what I'm sure is coming. We did learn two things, however. First, the vision can store about a terabyte worth of audio visual data. That seems woefully insufficient for a state-of-the-art android Avenger, but I suppose twenty years ago it was pie in the sky, wishful thinking.

Second, everything checks out okay except for this lack of purpose thing. I guess that's where we're heading with this story, to find a purpose for the Vision.

Who better to turn to when you need a little pep talk than Captain America. The man practically bleeds selfless leadership and guidance.

Then again, I guess he has a hot date to go antiquing.

An Avenger always has a backup plan, and for the Vision it's newspaper advice columns. 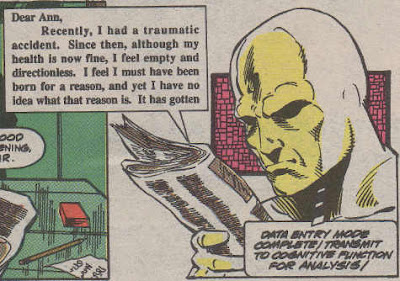 The Vision takes Ann Landers' advice to heart, and seeks out the counsel of a therapist to help him figure out his purpose. In this case, he seeks out the help of Miles Lipton, the pre-eminent researcher in artificial intelligence and consciousness theory.

His verdict? Use a handy-dandy holographic image inducer to go out into society and interact with real people. 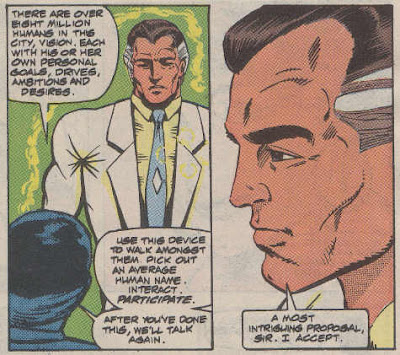 On a sidenote, whatever happened to holographic image inducers? They used to be everywhere in the 80's and 90's, but have seemed to have faded away since then. I guess we really are a more tolerable society, eh?

While we pondered that bit of trivia, the Vision completed his assignment and is the process of checking back in with the good doctor to talk about what he observed when his programming hits a glitch. 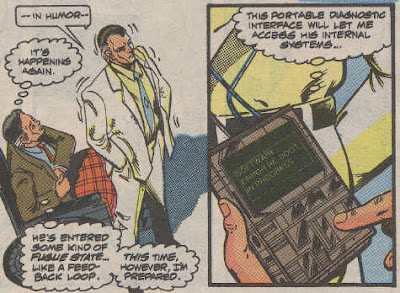 Luckily for the doctor, the Visions internal systems can be accessed by a couple of stray blue wires hanging out of his back. It makes you wonder why Ultron never thought to do that...slacker.

Back at his lab, Miles figures out what is wrong with Visions programming. Ever since he was disassembled, wiped clean, and reassembled, the Vision has been without a human brain pattern to provide the non-linear aspect of his personality. In a bout of incredible coincidence, Miles just happens to have a brain pattern template saved on a floppy disk that he can use to help the vision.

The pattern belongs to his son, who has recently passed away under mysterious circumstances. And since his son is no longer alive, the Vision will not be conflicted about copying another living persons brain patterns. Just as they begin the process to download them, they are interrupted by the sudden appearance of some mobsters. It would appear that they where involved with his sons death, and they're coming back to put some more pressure on Miles to stop snooping around.

Seizing an opportunity when they see it, they "convince" the doctor to come with them and reprogram the now comatose Vision to work for them. He agrees, but unknown to them, he plans on doing the old "double-cross" with the programming while using the brain patterns of his murdered son to help the Vision find purpose. 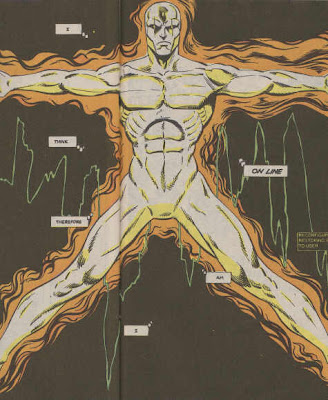 Once online, the two hatch a plan to put a stop to the mobster's mad-cap scheme. And here, the Vision does something I don't think I've ever seen him do before. He turns as intangible as he can get and enters the body of one of the gangsters and takes control of his central nervous system? 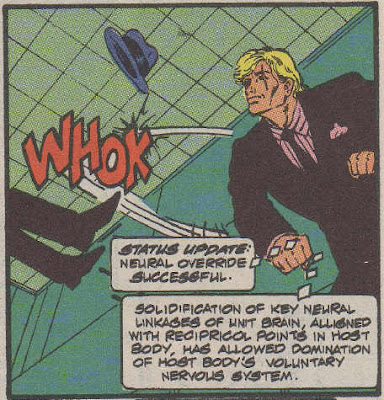 Jumping from body to body, the Vision manages to put all of the gangsters out of commission and gets a confession from the head honcho that he is responsible for killing Miles' son in the first place. Hopefully the Vision spared a gigabyte or two to record the confession.

In the end, all's well that ends well as the Vision takes the first steps towards learning to function with human brain patterns again and Miles gets back to living his life knowing that justice has been done for his son.

I now realize why the only thing I could remember about this issue was the cover...and damn, that's a nice looking cover. It's really about the only thing worth mentioning.

The story itself was an interesting concept, but the execution just seemed a bit obvious and a tad too reliant on coincidences. I'll definitely give it a solid B+ for effort, but it just seemed to limp along from scene to scene without much drama. Same goes for the art, as it did what it needed to, but not much else.

I guess I can also understand why the series petered out after forty issues...there just wasn't much life to this issue. Although maybe that was an intentional meta-reference on the nature of programming versus emotion.

All characters and artwork reproduced are (c) Marvel Comics
Posted by TomO. at 7:58 AM